By Bush administration standards, Henry Paulson, the Treasury secretary, is a good guy.
He isn’t conspicuously incompetent; and he isn’t trying to mislead us into war,
justify torture or protect corrupt contractors.
Paul Krugman, NYT, December 10, 2007

25 People to Blame for the Financial Crisis
TIME

David Stockman's Conspiracy Theory
Along with Goldman’s plenipotentiary at the US Treasury, Hank Paulson,
Bernanke stampeded the entirety of Washington into tossing out the window the whole rule book of
sound money, fiscal rectitude and free market discipline.
In fact, there was no extraordinary crisis.
The Lehman failure essentially triggered a self-contained leverage and liquidity bust in the canyons of Wall Street
13 April 2016

Faced with the most severe economic downturn since the Great Depression, the U.S. Federal Reserve did the only thing it could: flood the financial system with liquidity.

The move to so-called easy money arguably saved the world from a worse fate and radically changed the economic backdrop as well as the landscape for financial markets.

A decisive tipping point in the evolution of American capitalism and de- mocracy—the triumph of crony capitalism—took place on October 3, 2008.
That was the day of the forced march approval on Capitol Hill of the $700 billion TARP (Troubled Asset Relief Program) bill
to bail out Wall Street.

Russia 'planned Wall Street bear raid'
Hank Paulson, the former US treasury secretary
was talking about the financial crisis of the autumn of 2008,
and in particular the devastation being wreaked on Fannie Mae and Freddie Mac, the two huge underwriters of American mortgages - huge financial institutions that had a funny status at the time of being seen by investors to be the liability of the US government, which in legal reality were not exactly that.
Chinese government owned $1.7tn of mortgage-backed bonds issued by Fanny Mae and Freddie Mac
Robert Peston, BBC, 17 March 2014

On The Brink: Inside the race to stop the collapse of the global financial system [Kindle Edition]
Hank Paulson (Author)

Too Big to Fail: The Inside Story of How Wall Street and Washington Fought to Save the FinancialSystem - and Themselves [Kindle Edition] Andrew Ross Sorkin (Author)

Former Treasury Secretary Hank Paulson admitted that saying Lehman Brothers would not get a government bailout was a ploy in the negotiations
His new book on the financial crisis,
"On the Brink: Inside the Race to Stop the Collapse of the Global Financial System."
CNBC Feb 2010

"Everything bad that could happen was happening … the regulators, we all felt that there was a real chance that Morgan Stanley might go down, and if they went down it could very well take down Goldman and the whole system. And of course what we cared about was then there'd be a meltdown, and what the impact would be on the American people. It just would have been an economic disaster."

On the Brink: Inside the Race to Stop the Collapse of the Global Financial System (Amazon).

At first, nobody could quite believe Mr Paulson was incompetent.
Was it really possible that the Treasury Secretary had no idea of what to do with this unprecedented financial firepower?
Anatole Kaletsky, The Times, September 25, 2008

When further details of the Paulson plan failed to appear on Sunday it was assumed that the details were being untangled in late-night political negotiations. When there was still no plan on Monday, the view was that Mr Paulson must be holding back the details for his testimony to the Senate Banking Committee the following day. But then, to everyone's astonishment, Mr Paulson turned up to the committee on Tuesday morning with only the briefest opening statement, which simply repeated what he had already said the week before: the sky was falling and the only way to stop it was to give him authority over $700 billion in public money, to be spent in unspecified ways.

IF Henry M. Paulson Jr. hadn’t left Wall Street for Washington to become Treasury secretary in 2006, he would still be making tens of millions of dollars a year as the chairman of Goldman Sachs. He would be comfortably zipping around the globe on a corporate jet. He would be presiding over the only big Wall Street firm that hasn’t lost billions on bad debt.
New York Times 27/7 208

In October 2003, Treasury Secretary John Snow told Congress ``we need to be on guard'' against the ``perception'' that the U.S. government stood behind the stocks and bonds of Fannie Mae and Freddie Mac.
This week his successor, Henry Paulson, has seen a plan to make such a guarantee explicit to the brink of passage, getting a presidential veto threat withdrawn
July 25 (Bloomberg)

Treasury Acts to Save Mortgage Giants
The Bush administration on Sunday asked Congress to approve a sweeping rescue package that would give officials the power to inject billions of federal dollars into the beleaguered companies through investments and loans.
New York Times 14 July 2008

Fannie, Freddie and You
This implicit guarantee means that profits are privatized but losses are socialized. If Fannie and Freddie do well, their stockholders reap the benefits, but if things go badly, Washington picks up the tab.
PAUL KRUGMAN, NYT July 14, 2008

Such one-way bets can encourage the taking of bad risks, because the downside is someone else’s problem. The classic example of how this can happen is the savings-and-loan crisis of the 1980s: S.& L. owners offered high interest rates to attract lots of federally insured deposits, then essentially gambled with the money. When many of their bets went bad, the feds ended up holding the bag.
The eventual cleanup cost taxpayers more than $100 billion.

The Savings and Loans Bailout

By Bush administration standards, Henry Paulson, the Treasury secretary, is a good guy.
He isn’t conspicuously incompetent; and he isn’t trying to mislead us into war,
justify torture or protect corrupt contractors.

The plan is, as a Times editorial put it yesterday, “too little, too late and too voluntary.”
But from the administration’s point of view these failings aren’t bugs, they’re features. In fact, there’s a growing consensus among financial observers that the Paulson plan isn’t mainly intended to achieve real results. The point is, instead, to create the appearance of action, thereby undercutting political support for actual attempts to help families in trouble.

The Treasury chief's plan wouldn't fix the problems underlying today's financial crisis.
But what else did you expect from a package of "reforms" fronted by a Treasury secretary who was formerly the CEO of investment bank Goldman Sachs
Jim Jubak 4/4 2008

The nation's commercial banks long have been able to borrow short-term funds from the Fed in a pinch. In exchange, though, these institutions face strict regulations on how much capital they need to have to back their lending.
The Paulson plan would leave Lehman Bros., Goldman Sachs, Bear Stearns and others of the nonbank financial world unregulated but give them the same right to tap the Fed for cash.

The rescue of Bear Stearns was a paradigm-changing event.
Paul Krugman, NYT March 31, 2008

US Treasury Secretary Hank Paulson can be forgiven for pushing through a rescue plan last week
that amounts to a flagrant abuse of contract law and capitalist principles.
Would free marketeers rather see the whole edifice of capitalism burned to the ground to make their point?
Ambrose Evans-Pritchard, Daily Telegraph, 10/12/2007

But, hey, it might all be fine from here — China’s CSI 300 closed up 2.04 per cent today on the back of a heap of volatility, help from the ‘national team’, a killing of the flawed circuit breaker, and a strengthening of capital controls and the daily fix for the renminbi, which broke an eight-day weakening streak.

None of which treats the actual problems in China’s economy or the triggers behind the stock and currency moves, of course, but let’s not quibble. 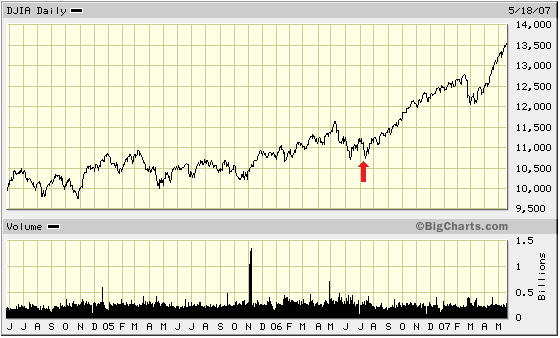 The second screen shot is from the always-handy BigCharts.com site where a little red arrow has been added to a two-year chart of the Dow Jones Industrial Average indicating the date when Mr. Paulson took office.
Tim Iacono 21/5 2007

One danger area - shared by his Bush predecessors at Treasury and some in the White House - may be his willingness to fall for the temptation of a weaker dollar.
In the 2004 PBS interview, Mr. Paulson said that
"I really believe that the decline in the dollar, the orderly decline in the dollar, will lead to a natural adjustment" in the trade deficit.
Wall Street Journal 31/5 2006

The current interest-rate cycle has been notable for its lack of financial casualties,
but if history is any guide that won't last.
Sooner or later there will be a hedge-fund blowup or corporate collapse or currency crisis, or something. And when there is, a competent and credible Treasury will be crucial to containing the damage.

He either knows, or knows people who know, the brave new world of hedge funds, private equity and credit derivatives. He also understands the rising importance of China to the U.S. economy, and thus the dangers of Congressional protectionism.